Scene 1: A hall in the King's palace; through the rear gate the pyramids and temples of Memphis are visible

Ramfis, the high priest of Egypt, tells Radamès, the young warrior, that war with the Ethiopians seems inevitable, and Radamès hopes that he will be chosen as the Egyptian commander (Ramfis, Radamès : Sì, corre voce l'Etiope ardisca / "Yes, it is rumored that Ethiopia dares once again to threaten our power").
Radamès dreams both of gaining victory on the battlefield and of Aida, the Ethiopian slave, with whom he is secretly in love (Radamès: Se quel guerrier io fossi! ... Celeste Aida / "Heavenly Aida"). Aida, who is also secretly in love with Radamès, is the captured daughter of the Ethiopian King Amonasro, but her Egyptian captors are unaware of her true identity. Her father has invaded Egypt to deliver her from servitude.
Amneris, the daughter of the Egyptian King, enters the hall. She too loves Radamès, but fears that his heart belongs to someone else (Radamès, Amneris: Quale insolita gioia nel tuo sguardo / "In your looks I trace a joy unwonted").
Aida appears and, when Radamès sees her, Amneris notices that he looks disturbed. She suspects that Aida could be her rival, but is able to hide her jealousy and approach Aida (Amneris, Aida, Radamès: Vieni, o diletta, appressati / "Come, O delight, come closer").

The King enters, along with the High Priest, Ramfis, and the whole palace court. A messenger announces that the Ethiopians, led by King Amonasro, are marching towards Thebes. The King declares war and proclaims that Radamès is the man chosen by the goddess Isis to be the leader of the army (The King, Messenger, Radamès, Aida, Amneris, Ramfis, chorus: Alta cagion v'aduna .. Guerra, guerra, guerra! / "Oh fate o'er Egypt looming .. War, war, war!"). Upon receiving this mandate from the King, Radamès proceeds to the temple of Vulcan to take up the sacred arms (The King, Radamès, Aida, Amneris, chorus: Su! del Nilo al sacro lido .. (Reprise) Guerra, guerra guerra! / "On! Of Nilus' sacred river, guard the shores .. (Reprise) War, war, war!").
Alone in the hall, Aida feels torn between her love for her father, her country, and Radamès (Aida: Ritorna vincitor / "Return a conqueror").

Scene 2: Inside the Temple of Vulcan

Scene 1: The chamber of Amneris

Dances and music to celebrate Radamès’ victory take place (Chorus, Amneris: Chi mai fra gli inni e i plausi / “Our songs his glory praising”). However, Amneris is still in doubt about Radamès’ love and wonders whether Aida is in love with him. She tries to forget her doubt, entertaining her worried heart with the dance of Moorish slaves (Chorus, Amneris: Vieni: sul crin ti piovano / “Come bind your flowing tresses”).
When Aida enters the chamber, Amneris asks everyone to leave. By falsely telling Aida that Radamès has died in the battle, she tricks her into professing her love for him. In grief, and shocked by the news, Aida confesses that her heart belongs to Radamès eternally (Amneris, Aida: Fu la sorte dell’armi a’ tuoi funesta / “The battle’s outcome was cruel for your people . . .”).
This confession fires Amneris with rage, and she plans on taking revenge on Aida. Ignoring Aida’s pleadings (Amneris, Aida, chorus: Su! del Nilo al sacro lido / “Up! at the sacred shores of the Nile”), Amneris leaves her alone in the chamber.

Scene 2: The grand gate of the city of Thebes

Radamès returns victorious and the troops march into the city (Chorus, Ramfis: Gloria all’Egitto, ad Iside / “Glory to Egypt, [and] to Isis!”).

The Egyptian king decrees that on this day the triumphant Radamès may have anything he wishes. The Ethiopian captives are led onstage in chains, Amonasro among them. Aida immediately rushes to her father, who whispers to her to conceal his true identity as King of Ethiopia from the Egyptians. Amonasro deceptively proclaims to the Egyptians that the Ethiopian king (referring to himself) has been slain in battle. Aida, Amonasro, and the captured Ethiopians plead with the Egyptian King for mercy, but Ramfis and the Egyptian priests call for their death (Aida, Amneris, Radamès, The King, Amonasro, chorus: "Che veggo! .. Egli? .. Mio padre! .. Anch'io pugnai .. Struggi, o Re, queste ciurme feroci" / “What do I see?.. Is it he? My father? .. Destroy, O King, these ferocious creatures”).
Claiming the reward promised by the King of Egypt, Radamès pleads with him to spare the lives of the prisoners and to set them free. The King grants Radamès' wish, and declares that he (Radamès) will be his (the King's) successor and will marry the King's daughter (Amneris). (Aida, Amneris, Radamès, Ramfis, The King, Amonasro, chorus: O Re: pei sacri Numi! .. Gloria all'Egitto / “O King, by the sacred gods . . . Glory to Egypt!”). At Ramfis' suggestion to the King, Aida and Amonasro remain as hostages to ensure that the Ethiopians do not avenge their defeat.

On the banks of the Nile, near the Temple of Isis
Prayers are said (Chorus, High Priestess, Ramfis, Amneris: O tu che sei d'Osiride / "O thou who to Osiris art ...") on the eve of Amneris and Radamès' wedding in the Temple of Isis. Outside, Aida waits to meet with Radamès as they had planned (Aida: Qui Radamès verra .. O patria mia / "Oh, my dear country!").
Amonasro appears and orders Aida to find out the location of the Egyptian army from Radamès. Aida, torn between her love for Radamès and her loyalty to her native land and to her father, reluctantly agrees. (Aida, Amonasro: Ciel, mio padre! .. Rivedrai le foreste imbalsamate / "Once again shalt thou gaze."). When Radamès arrives, Amonasro hides behind a rock and listens to their conversation.
Radamès affirms that he will marry Aida (Pur ti riveggo, mia dolce Aida .. Nel fiero anelito; Fuggiam gli ardori inospiti... Là, tra foreste vergini / "I see you again, my sweet Aida!"), and Aida convinces him to flee to the desert with her.
In order to make their escape easier, Radamès proposes that they use a safe route without any fear of discovery and reveals the location where his army has chosen to attack. Upon hearing this, Amonasro comes out of hiding and reveals his identity. Radamès realizes, to his extreme dismay, that he has unwittingly revealed a crucial military secret to the enemy. At the same time, Amneris and Ramfis leave the temple and, seeing Radamès in conference with the enemy, call for the imperial guards. Amonasro draws a dagger, intending to kill Amneris and Ramfis before the guards can hear them, but Radamès disarms him, quickly orders him to flee with Aida, and surrenders himself to the imperial guards as Aida and Amonasro run off. The guards arrest him as a traitor.

Scene 1: A hall in the Temple of Justice. To one side is the door leading to Radamès' prison cell
Amneris desires to save Radamès (L'aborrita rivale a me sfuggia / "My hated rival has escaped me"). She calls for the guard to bring him to her.
She asks Radamès to deny the accusations, but Radamès, who does not wish to live without Aida, refuses. He is relieved to know Aida is still alive and hopes she has reached her own country (Amneris, Radamès: Già i Sacerdoti adunansi / "Already the priests are assembling").
Offstage, Ramfis recites the charges against Radamès and calls on him to defend himself, but he stands mute, and is condemned to death as a traitor. Amneris, who remains onstage, protests that he Radamès is innocent, and pleads with the priests to show mercy. The priests sentence him to be buried alive; Amneris weeps and curses the priests as he is taken away (Judgment scene, Amneris, Ramfis, and chorus: Ahimè! .. morir mi sento .. Radamès, e deciso il tuo fato / "Alas ... I feel death .. Radamès, your fate is decided").

Scene 2: The lower portion of the stage shows the vault in the Temple of Vulcan; the upper portion represents the temple itself
Radamès has been taken into the lower floor of the temple and sealed up in a dark vault, where he thinks that he is alone. As he hopes that Aida is in a safer place, he hears a sigh and then sees Aida. She has hidden herself in the vault in order to die with Radamès (Radamès and Aida: La fatal pietra sovra me si chiuse. / "The fatal stone now closes over me"). They accept their terrible fate (Radamès: Morir! Si pura e bella / "To die! So pure and lovely!") and bid farewell to Earth and its sorrows. Above the vault in the temple of Vulcan, Amneris weeps and prays to the goddess Isis. In the vault below, Aida dies in Radamès' arms as the priests, offstage, pray to the god Ftha. (Chorus, Aida, Radamès, Amneris: Immenso Ftha / "Almighty Ptah.") 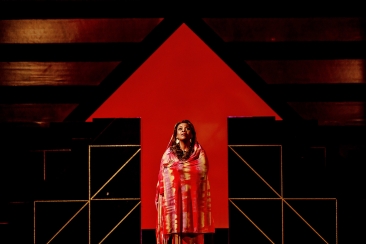 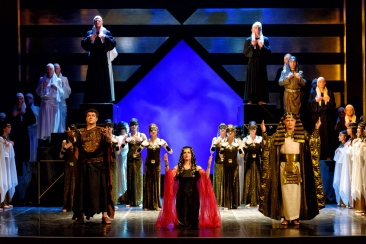 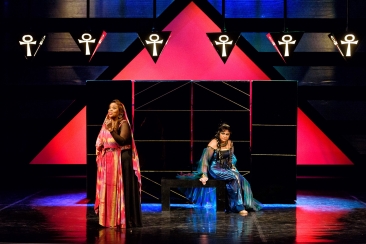 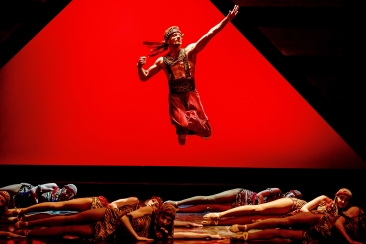 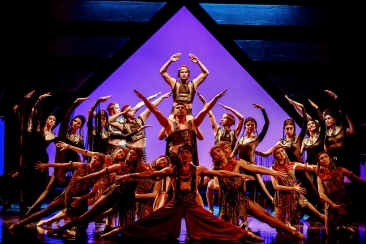 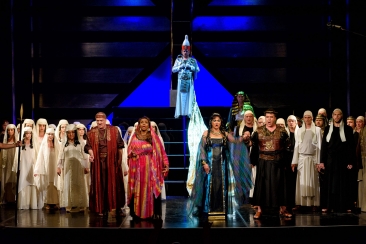 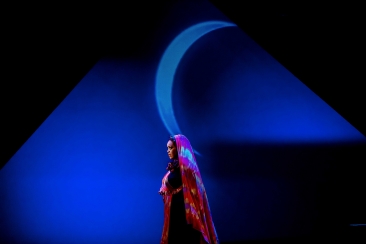 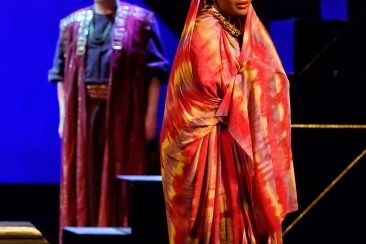 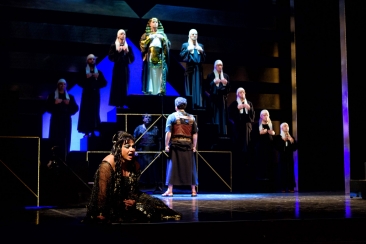 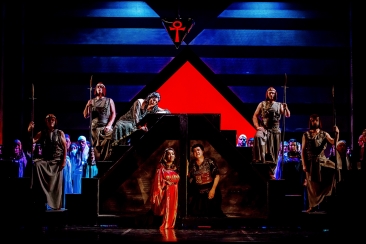