Place: Spain and Italy
Time: around 1750

The music begins with the opera's "Fate" motif, an ominous three Es unison in the brass.

The mansion of Leonora's family, in Seville

Don Alvaro is a young nobleman from South America (presumably Peru) who is part Indian and who has settled in Seville where he is not very well thought of. He falls in love with Donna Leonora, the daughter of the Marquis of Calatrava[11], but Calatrava is determined that she shall marry only a man of the highest birth. Despite knowing her father’s aversion to Alvaro, Leonora is deeply in love with him, and she determines to give up her home and country in order to elope with him. In this endeavor, she is aided by her confidante, Curra. (Me pellegrina ed orfana – "Exiled and orphaned far from my childhood home").

When Alvaro arrives to fetch Leonora, she hesitates: she wants to elope with him, but part of her wants to stay with her father; she eventually pulls herself together, ready for their elopement. However, the Marquis unexpectedly enters and discovers Leonora and Alvaro together. He threatens Alvaro with death, and in order to remove any suspicion as to Leonora’s purity, Alvaro surrenders himself. As he flings down his pistol, it goes off, mortally wounding the Marquis, who dies cursing his daughter.

Scene 1: An inn in the village of Hornachuelos

About a year has passed since the death of the Marquis of Calatrava. While fleeing the scene, Leonora and Alvaro have gotten separated, and neither has made any concerted effort to find the other.

In this scene, the Alcalde, several peasant muleteers, Don Carlo of Vargas (the brother of Donna Leonora), and many others are gathered in the kitchen of the inn as dinner is served. Don Carlo, disguised as a student from Salamanca and using the fictitious name Pereda, is now seeking revenge against Alvaro and Leonora for dishonoring the family name. (Son Pereda son ricco d'onore – "I am Pereda, of honorable descent"). During the supper, Preziosilla, a popular young gypsy girl, arrives, and she tells the young men’s fortunes and exhorts them to enlist in the war (Al suon del tamburo – "When side drums rattle") for Italy’s freedom, which all agree to do. Leonora arrives in male attire, on her way to a nearby monastery, but luckily she slips away without being discovered by Carlo.

Scene 2: A monastery nearby

Leonora has come to take refuge in the monastery to live out her remaining days secluded from the rest of mankind. (Son giunta! ... Madre, pietosa Vergine – "I've got here! Oh, thank God!") After a somewhat surly reception by Fra Melitone, she tells the abbot, Padre Guardiano, her true name and her wish to spend the remainder of her life in the monastery's hermitage. The abbot recounts the trials she will have to undergo. Leonora, Padre Guardiano, Fra Melitone, and the other monks join in prayer as she is accepted in the hermitage.

Scene 1: A forest near Velletri, in Italy

Meanwhile Don Alvaro has joined the Spanish army under the name of Don Federico Herreros (La vita è inferno all'infelice ... O tu che in seno agli angeli – "Life is a hell to those who are unhappy....Oh, my beloved, risen among the angels"). One night he saves the life of Don Carlo who is serving in the same army under the name of Don Felix Bornos. They become close friends and go side by side into the Battle of Velletri, an historical event which occurred in 1744.

In one of these engagements Don Alvaro returns, believing himself to be mortally wounded. He entrusts to Don Carlo’s care a valise containing a bundle of letters which he orders his friend to destroy as soon as Don Alvaro dies: (Solenne in quest'ora – "Swear to me, in this solemn hour"). Don Carlo has sworn not to look at the contents of the letters; but he becomes suspicious of his friend. (Morir! Tremenda cosa! ... Urna fatale del mio destino – "To die! What an awesome thought...Get away, fatal lot sent to my Destiny!"). He opens the valise, finds his sister’s picture, and realizes Alvaro's true identity. At that moment a surgeon brings word that Don Alvaro may recover. Don Carlo is overjoyed at the idea of avenging his father’s death.

Having recovered, Alvaro is confronted by Carlo. They begin to duel, but are pulled away from each other by the soldiers. As they restrain Carlo, the anguished Don Alvaro vows to enter a monastery.Scene 3: A camp near the battleground

The soldiers gather. Trabucco, the peddler, tries to sell them his wares; Fra Melitone chastises them for their godless ways; and Preziosilla leads them in a chorus in praise of the military life (Rataplan, rataplan, della gloria – "Rum-tum-tum on the drum is the music that makes a soldier's martial spirit rise").

Under the name of Father Raphael, Don Alvaro has entered the monastery at Hornachuelos, near which is Leonora’s cave. Don Carlo arrives and forces him to fight (Le minacce, i fieri accenti – "May the winds carry off with them").

Leonora prays that she may find peace in death (Pace, pace mio Dio! – "Peace, O mighty Father, give me peace!"). Alvaro runs in, calling for help, having mortally wounded Carlo in their duel. The two lovers recognize each other. Leonora seeks her brother and, as she bends over him, he stabs her in the heart. Leonora returns with Padre Guardiano; he and Alvaro pray to heaven as she dies.
[Original version: Overcome by the guilt at having killed or caused the death of all the Calatravas, Alvaro jumps to his death into the nearby ravine, cursing humankind, over the protests of Father Guardiano]. 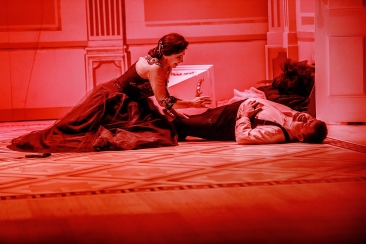 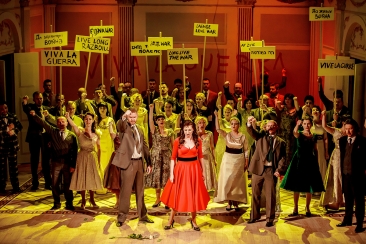 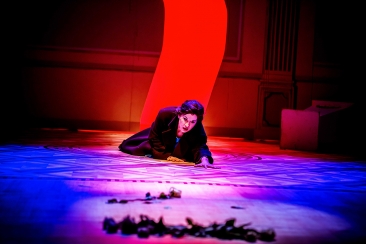 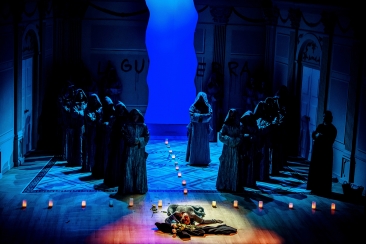 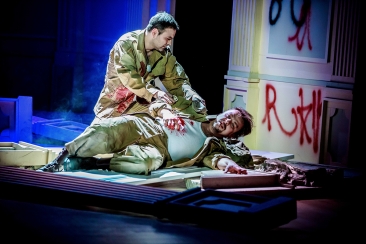 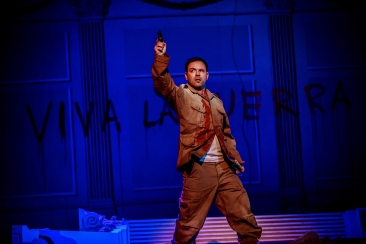 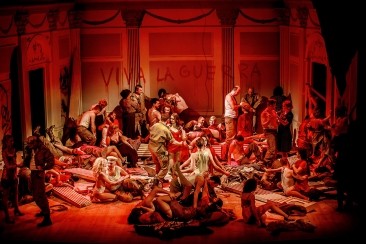 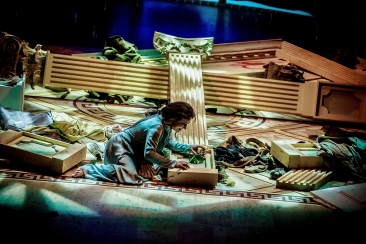