Time: 587 BC
Place: Jerusalem and Babylon

'Thus saith the Lord, Behold, I shall deliver this city into the hand of the King of Babylon, and he will burn it with fire' (Jeremiah 21:10)

Interior of the Temple of Solomon

The Israelites pray as the Babylonian army advances on their city ("Gli arredi festivi giù cadano infranti" / "Throw down and destroy all festive decorations"). The High Priest Zaccaria tells the people not to despair but to trust in God ("D'Egitto là su i lidi" / "On the shores of Egypt He saved the life of Moses"). The presence of a hostage, Fenena, younger daughter of Nabucco, King of Babylon, may yet secure peace ("Come notte a sol fulgente" / "Like darkness before the sun"). Zaccaria entrusts Fenena to Ismaele, nephew of the King of Jerusalem and a former envoy to Babylon. Left alone, Fenena and Ismaele recall how they fell in love when Ismaele was held prisoner by the Babylonians, and how Fenena helped him to escape to Israel. Nabucco's supposed elder daughter, Abigaille, enters the temple with Babylonian soldiers in disguise. She, too, loves Ismaele. Discovering the lovers, she threatens Ismaele: if he does not give up Fenena, Abigaille will accuse her of treason. If Ismaele returns Abigaille's love, however, Abigaille will petition Nabucco on the Israelites' behalf. Ismaele tells Abigaille that he cannot love her and she vows revenge. Nabucco enters with his warriors ("Viva Nabucco" / "Long live Nabucco"). Zaccaria defies him, threatening to kill Fenena if Nabucco attacks the temple. Ismaele intervenes to save Fenena, which removes any impediment from Nabucco destroying the temple. He orders this, while Zaccaria and the Israelites curse Ismaele as a traitor.

Act 2: The Impious One

'Behold, the whirlwind of the Lord goeth forth, it shall fall upon the head of the wicked' (Jeremiah 30:23)

Nabucco has appointed Fenena regent and guardian of the Israelite prisoners, while he continues the battle against the Israelites. Abigaille has discovered a document that proves she is not Nabucco's real daughter, but the daughter of slaves. She reflects bitterly on Nabucco's refusal to allow her to play a role in the war with the Israelites and recalls past happiness ("Anch'io dischiuso un giorno" / "I too once opened my heart to happiness"). The High Priest of Bel informs Abigaille that Fenena has released the Israelite captives. He plans for Abigaille to become ruler of Babylon, and with this intention has spread the rumour that Nabucco has died in battle. Abigaille determines to seize the throne ("Salgo già del trono aurato" / "I already ascend the [bloodstained] seat of the golden throne").

Scene 2: A room in the palace

Zaccaria reads over the Tablets of Law ("Vieni, o Levita" / "Come, oh Levite! [Bring me the tables of the law]"), then goes to summon Fenena. A group of Levites accuse Ismaele of treachery. Zaccaria returns with Fenena and his sister Anna. Anna tells the Levites that Fenena has converted to Judaism, and urges them to forgive Ismaele. Abdallo, a soldier, announces the death of Nabucco and warns of the rebellion instigated by Abigaille. Abigaille enters with the High Priest of Bel and demands the crown from Fenena. Unexpectedly, Nabucco himself enters; pushing through the crowd, he seizes the crown and declares himself not only king of the Babylonians but also their god. The high priest Zaccaria curses him and warns of divine vengeance; an incensed Nabucco in turn orders the death of the Israelites. Fenena reveals to him that she has embraced the Jewish religion and will share the Israelites' fate. Nabucco is furious and repeats his conviction that he is now divine ("Non son più re, son dio" / "I am no longer King! I am God!"). There is a crash of thunder and Nabucco promptly loses his senses. The crown falls from his head and is picked up by Abigaille, who pronounces herself ruler of the Babylonians.

Scene 1: The Hanging Gardens of Babylon

Abigaille is now Queen of Babylon. The High Priest of Bel presents her with the death warrant for the Israelites, as well as for Fenena. Nabucco, still insane, tries to reclaim the throne without success. Though his consent to the death warrant is no longer necessary, Abigaille tricks him into signing it. When Nabucco learns that he has consigned his (true) daughter to death, he is overcome with grief and anger. He tells Abigaille that he is not in fact her father and searches for the document evidencing her true origins as a slave. Abigaille mocks him, produces the document and tears it up. Realizing his powerlessness, Nabucco pleads for Fenena's life ("Oh di qual onta aggravasi questo mio crin canuto" / "Oh, what shame must my old head suffer"). Abigaille is unmoved and orders Nabucco to leave her.

Scene 2: The banks of the River Euphrates

The Israelites long for their homeland ("Va, pensiero, sull'ali dorate" / "Fly, thought, on golden wings; [Fly and settle on the slopes and hills]"). The high priest Zaccaria once again exhorts them to have faith: God will destroy Babylon. The Israelites are inspired by his words.

'Bel is confounded, Merodach is broken to pieces; her idols are confounded, her images are broken in pieces.' (Jeremiah 50:2)

Nabucco awakens, still confused and raving. He sees Fenena in chains being taken to her death. In despair, he prays to the God of the Hebrews. He asks for forgiveness, and promises to rebuild the temple in Jerusalem and convert to Judaism if his prayers are answered ("Dio di Giuda" / "God of Judah! [The altar, your sacred Temple, shall rise again]"). Miraculously, his strength and reason are immediately restored. Abdallo and loyal soldiers enter to release him. Nabucco resolves to rescue Fenena and the Israelites as well as to punish the traitors.

Scene 2: The Hanging Gardens of Babylon

Fenena and the Israelite prisoners are led in to be sacrificed ("Va! La palma del martirio" / "Go, win the palm of martyrdom"). Fenena serenely prepares for death. Nabucco rushes in with Abdallo and other soldiers. He declares that he will rebuild the Temple of Jerusalem and worship the God of the Israelites, ordering the destruction of the idol of Bel. At his word, the idol falls to the ground of its own accord and shatters into pieces. Nabucco tells the Israelites that they are now free and all join in praise of Jehovah. Abigaille enters, supported by soldiers. She has poisoned herself. She begs forgiveness of Fenena, prays for God's mercy and dies. Zaccaria proclaims Nabucco the servant of God and king of kings. 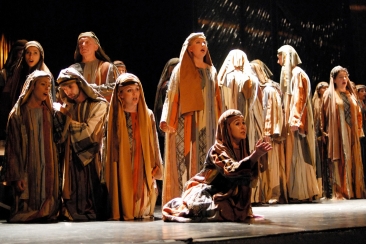 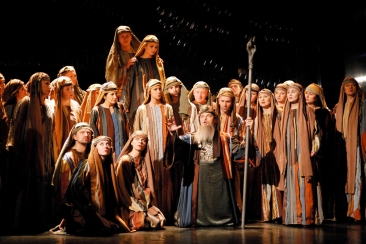 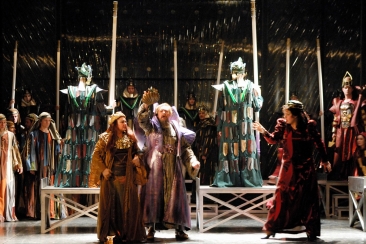 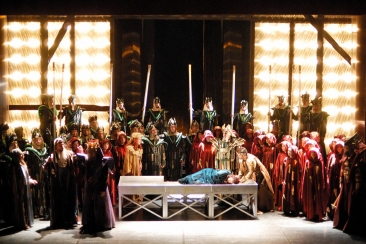 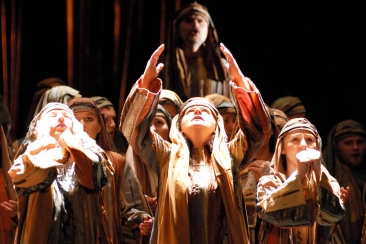 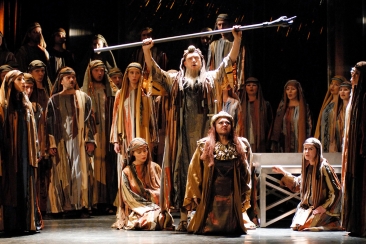 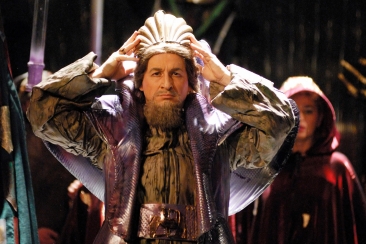 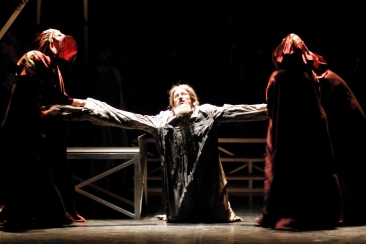 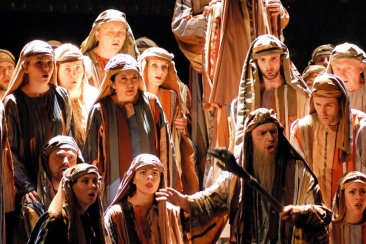 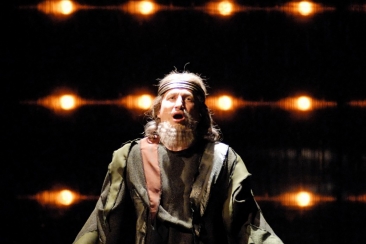