It is Christmas Eve. Family and friends have gathered in the parlor to decorate the beautiful Christmas tree in preparation for the party. Once the tree is finished, the children are sent for. They stand in awe of the tree sparkling with candles and decorations.

The party begins. A march is played. Presents are given out to the children. Suddenly, as the owl-topped grandmother clock strikes eight, a mysterious figure enters the room. It is Drosselmeyer, a local councilman, magician, and Clara's godfather. He is also a talented toymaker who has brought with him gifts for the children, including four lifelike dolls who dance to the delight of all. He then has them put away for safekeeping.

Clara and Fritz are sad to see the dolls being taken away, but Drosselmeyer has yet another toy for them: a wooden nutcracker carved in the shape of a little man, used for cracking nuts. The other children ignore it, but Clara immediately takes a liking to it. Fritz, however, breaks it, and Clara is heartbroken.

During the night, after everyone else has gone to bed, Clara returns to the parlor to check on her beloved nutcracker. As she reaches the little bed, the clock strikes midnight and she looks up to see Drosselmeyer perched atop it. Suddenly, mice begin to fill the room and the Christmas tree begins to grow to dizzying heights. The nutcracker also grows to life size. Clara finds herself in the midst of a battle between an army of gingerbread soldiers and the mice, led by their king. They begin to eat the soldiers.

The nutcracker appears to lead the soldiers, who are joined by tin ones and dolls who serve as doctors to carry away the wounded. As the Mouse King advances on the still-wounded nutcracker, Clara throws her slipper at him, distracting him long enough for the nutcracker to stab him.[22]

The mice retreat and the nutcracker is transformed into a handsome Prince. He leads Clara through the moonlit night to a pine forest in which the snowflakes dance around them, beckoning them on to his kingdom as the first act ends.

Scene 1: The Land of Sweets

Clara and the Prince travel to the beautiful Land of Sweets, ruled by the Sugar Plum Fairy in the Prince's place until his return. He recounts for her how he had been saved from the Mouse King by Clara and transformed back into himself.

In honor of the young heroine, a celebration of sweets from around the world is produced: chocolate from Spain, coffee from Arabia, tea from China, and candy canes from Russia all dance for their amusement; Danish shepherdesses perform on their flutes; Mother Ginger has her children, the Polichinelles, emerge from under her enormous hoop skirt to dance; a string of beautiful flowers perform a waltz.[31][32] To conclude the night, the Sugar Plum Fairy and her Cavalier perform a dance.

A final waltz is performed by all the sweets, after which the Sugar Plum Fairy ushers Clara and the Prince down from their throne. He bows to her, she kisses Clara goodbye, and leads them to a reindeer drawn sleigh. It takes off as they wave goodbye to all the subjects who wave back.

In the original libretto, the ballet's apotheosis "represents a large beehive with flying bees, closely guarding their riches".Just like Swan Lake, there have been various alternative endings created in productions subsequent to the original. 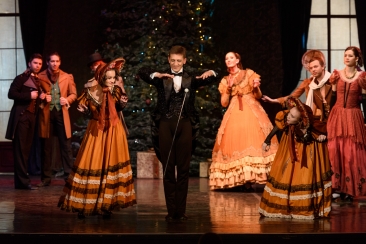 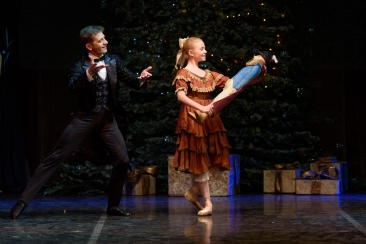 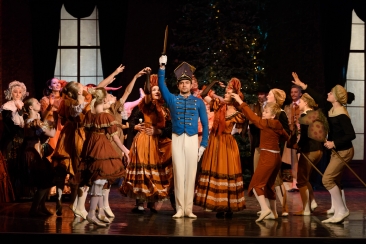 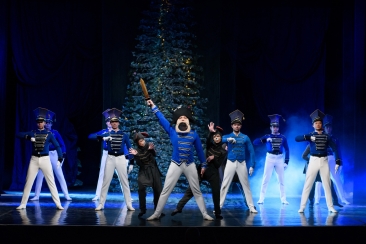 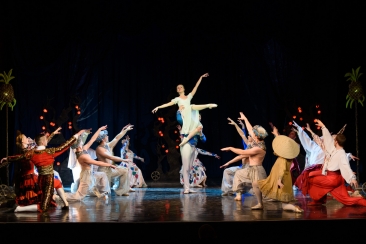 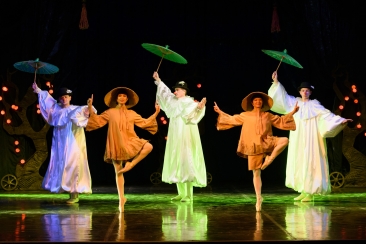 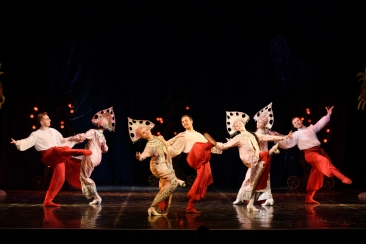